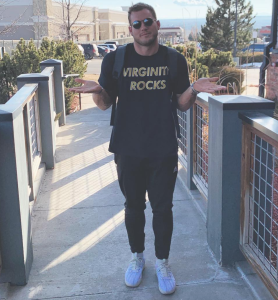 LOS ANGELES—Colton Underwood, the star of The Bachelor, was admitted to UCLA Medical Center this week for what is being called the most severe case of blue balls in recent history.

Underwood was reportedly found passed out alongside the lingerie section of a JC Penny where security camera footage shows he went into shock after witnessing a mannequin in a lace bra and panties.

He currently remains in an induced coma where his penis is connected to life-support and his testicles have been submerged in ice water to numb the pain.

Doctor Sims went on to say that Colton’s blue balls are swelling at an alarming rate and there could be life-threatening consequences, unless he gets laid soon.

“I am prescribing Mr. Underwood a large dosage of pussy to be administered twice a day for the next thirty years,” Sims said. “We have also made him a Tinder profile to help expedite his recovery.”

Fortunately, millions of women from across the country have donated their vaginas to the cause. However, Underwood’s family remains resilient in honoring Colton’s wish to wait until he has found “the one.”