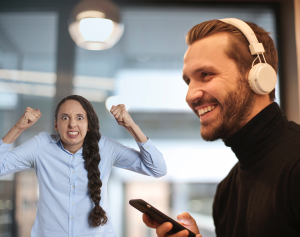 “Never before has silencing your nagging wife been so easy,” said Bose CEO Phil Hess. “We here at Bose are delighted to announce a product that will finally put your disruptive wife volume at zero.”

Noting the superior technology of the product, he stated, “Every pair features a padded, porous open cell absorption layer designed to negate your wife’s high pitch frequency complaints, along with a lossless, uncompressed sound system that calms the wearer with soothing leaf blower ambient noises.”

Elaborating on the easy, three-part set up process, Hess went on, “Step one: tell your wife that reality TV shows are scripted. Step two: put the headphones on and press the power button. Step three: effortlessly ignore her as she blows up about Kim Kardashian’s charity or whatever.”

The event even featured a live demonstration of an aggravated woman on stage screaming at her headphoned husband to get the mail as he remained remarkably unaware in his recliner watching the Packers freaking destroy the Broncos.

“Whether your watching the game, at dinner with her family, or even staring directly at her as she pops a blood vessel, you won’t be able to hear a damn thing.”

After a brief Q&A with the audience, Hess announced, unfortunately, that wives would be sold separately.